NOSTALGIA AND AN EXOTIC DESTINATION 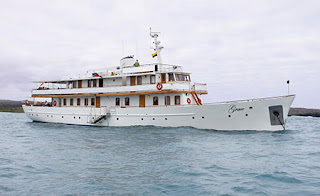 It’s a winning combination : a legendary yacht like the M/Y Grace, originally commissioned before the Wall Street Crash of 1929, and the Galapagos Islands.

Monica, as she was originally named, served as the personal yacht of high powered industrialists, was conscripted into the British Navy during WWII and took part in Dunkirk, captured a German torpedo E-boat and had an unconfirmed sinking of a U-boat to her credit.

Winston Churchill is purported to have cruised the Mediterranean aboard her after the war. In 1951 she was acquired by Aristotle Onassis, who renamed her Arion and gave the yacht as a wedding gift to Prince Rainier III of Monaco and his bride, Hollywood film legend Grace Kelly, who rechristened her Deo Juvante II in time to honeymoon aboard her.

Quasar has renamed the yacht Grace to recapture this magical time when she delivered the royal couple to Monaco and took them on their honeymoon, which is documented in a newsreel available on Youtube™ at: http://www.youtube.com/watch?v=rZxjNmR1SVo

The official launch of the yacht in the Galapagos this month coincides with the 50th anniversary of the Galapagos National Park. 2009 also marks the bicentennial of Charles Darwin, whose field work in the islands led to his writing of On the Origin of Species and his theory of evolution.

Although born in Anacortes, Washington in 1915 where his early schooling took place, Warren had a yen for the Marines and for the surfing life. As a young man he moved to Hawaii where he did join the Marine Corps in 1933 and did surf. Months on shore patrol as a Marine enlisted man prompted him to become a Honolulu cop when he received his discharge.

But a cop’s life was not for Warren. He joined Inter-Island Steam Navigation Company and later Theo H. Davies, the Hawaiian shipping firm and rose to become its president.

In 1959 he was tapped by P & O – Peninsular and Oriental Navigation Company Ltd. – and moved to San Francisco where he became the president of P & O, North America which was operating line voyages from the UK to Australia and across the Pacific to San Francisco. Warren segmented these long voyages and marketed them as cruises. Always enamored by the lure of the sea, he created a personality for those old British liners like Himalaya, Chusan, Orsova, Orcades and Oronsay and marketed them as being POSH (port out, starboard home) experiences and invited the public to “Run Away to Sea” in a classic but memorable advertising campaign by the late advertising man David Ogilvy.

When P & O joined Princess Cruises in the Love Boat concept, Warren, by that time, a high profile figure in passenger shipping with a strong bent toward luxury, became the founding president of Royal Viking Line in 1973. As we all know, Royal Viking set the standard for luxury cruising and were generally recognized as operating the finest ships afloat. It was Warren Titus who had the vision to articulate this luxury concept and he developed an international reputation. Today, his name is virtually synonymous with Luxury cruising.

Atle Brynestad, the Norwegian entrepreneur sought Titus out to become the founding president of Seabourn Cruise Line in 1987. Later when Seabourn merged with Cunard Warren he became a trusted advisor to both lines and also continued in his role as Chairman of their past passenger clubs.

Known for his style, Warren Titus was a courtly and handsome man – catnip to the ladies. But his style went further. During his long career Warren Titus was always greatly loved by three important groups – the traveling public, the travel agent community, and his fellow employees. He was always the man do the hard jobs like telephoning an irate agent or an unhappy customer. “Let Warren do it,” was a frequent suggestion throughout his career. If he “did it” it would be done with charm, style and effectiveness.

The Cruise Vessel Security and Safety Act of 2009 was voted out of the Commerce Committee by a unanimous vote. Originally introduced in the 110th Congress as a companion bill to Rep. Doris Matsui (D-CA) and former Rep. Christopher Shays (R-CT), the legislation would require all crimes that occur aboard cruise ships to be reported to the Coast Guard and Federal Bureau of Investigations.

“The term ‘duty free’ does not apply to the safety of passengers,” said Sen. Kerry. “Murky lines of jurisdiction are no longer an excuse for risking the safety of millions of Americans who will board cruise ships this year. Security, safety, and accountability must all be strengthened to hold criminals accountable and end the cycle of serious crimes on these vessels. I thank Chairman Rockefeller for giving this issue the timely attention it deserves and call on my colleagues to quickly move this legislation to the Senate floor.”

“The Cruise Vessel Security and Safety Act of 2009 will ensure the safety and protection of millions of Americans who embark on cruises each year,” said Rep. Matsui. “For far too long, American families have unknowingly been at risk on cruise ships. I applaud Senator Kerry and the Committee for making the safety of Americans a priority, and look forward to making significant progress moving this legislation forward in the coming weeks.”

“This is truly an historic day in the fight for the safety of cruise ship passengers,” said Ken Carver, the President of the International Cruise Victims Association and the father of one of Senator Kerry’s constituents, Merriam, who disappeared on a cruise ship in 2004. “The efforts made by Senator Kerry and the Commerce Committee have truly made the difference.”

To get an idea of what the bill contains – a summary of the current bill - visit http://www.prowsedge.com/cruise-vessel-security-and-safety-act-2009-summary.html
Cruise ships, which operate under foreign flags of convenience, are not currently required under U.S. law to report crimes that occur outside of U.S. territorial waters.
Posted by Prow's Edge Cruise Magazine at 7:03 PM No comments:

Susan R Norton "knows" poetry – she's been doing it since the seventh grade! Since then, her poetry has been widely published in over 70 literary journals, magazines, anthologies, newspapers and greeting cards. Publications that have carried her work include The Southern Poetry Review, Writer's World Magazine, Silver Quill and The Knews. She has won the National Poetry Day Contest for “The Poet” in 1995, The Southern Poetry Review's Editor's Choice Award for “Fragile, Handle With Care” in 1996 and five other writing awards.

And now, Susan R Norton climbs aboard Prowsedge to share her reviews of cruising the Caribbean with Windstar Cruises in her article: Pure Bred Sails In The Sunset (A Wind Surf Cruise).

Not only a poet, Susan R. Norton (“Have Laptop, Will Travel”) is also a travel writer who has been published in a wide range of magazines, newspapers and Internet sites. She is the recipient of 10 writing awards.
Posted by Prow's Edge Cruise Magazine at 4:36 PM No comments:

WINDSTAR TAKES ITS PLACE AT THE WHEEL ONCE AGAIN

Big news about Windstar Cruises – the world's “Favourite Small-Ship Cruise Line” – as the company takes over shipboard management of its luxury yachts.

Yesterday, Windstar Cruises announced that it will be ending its management agreement with V. Ships Leisure and taking complete control of managing its shipboard deck, engine, and hotel operations, as well as shore-based management functions such as port operations, technical and hotel purchasing, compliance, and human resources.

New positions have been created at Windstar’s headquarters in Seattle to manage the new responsibilities.

For more information on the news visit http://www.prowsedge.com/cruises-news-080709-windstar-cruises.html
Posted by Prow's Edge Cruise Magazine at 7:48 AM No comments:

OPERA WITH THE STARS UNDER THE STARS

A grand night of operatic proportions awaits guests from the five star expedition cruise ship Orion at the conclusion of its Kimberley Expedition voyage in Western Australia in late August 2009.

Having absorbed the visual drama of the spectacular Kimberley coast with its vast tidal changes, emerging reefs, swirling waters, dramatic waterfalls and prolific marine life, Orion’s guests will be invited to enjoy Broome’s iconic OPERA UNDER THE STARS®, a highlight of Broome's cultural events calendar.

Overlooking Cable Beach, famed for its fiery sunsets, this ‘one night only’ evening provides a delightful contrast of informality countered by uplifting voices of opera singers who have received critical acclaim for performances both at home and overseas.

The musical programme includes the sublime aria “Casta Diva” from Bellini’s Norma, excerpts from Carmen by Bizet as well as duets by Verdi and Delibes.

And to tempt you even further:

Fares begin from $8,790 per person for an ocean view Category B Stateroom.
Suites begin from $12,125 per person for a Junior Suite and Owners Suites with French Balcony are $18,410 per person
Expedition fares are per person twin occupancy include accommodation, all meals, landings and selected activities ashore plus invitation to OPERA UNDER THE STARS® in Broome on Saturday 29th August.
Limited availability.

Further information on Orion Expedition Cruises can be obtained by visiting the website www.orionexpeditions.com
Posted by Prow's Edge Cruise Magazine at 5:14 PM No comments:

For cruise fans who like to keep track of the various blogs about cruising, here's a new one for you.

In an effort to expand its integrated social media program, Star Clippers has launched a blog at www.starclippersblog.com.

The site, dedicated to fans of Star Clippers and tall-ship sailing, will create an online community around the line's fleet of the largest and tallest sailing ships in the world.

A highlight of the blog will be "Postcards from ..." entries featuring Star Clippers vacation photos sent in by guests. "Meet the ..." will introduce readers to on-board staff, and the blog also will showcase popular on-board recipes, information about the ships' ports of call and a "Captain's Log" with journaling and commentary from the line's masters.