The Bolshoi theatre has finally re-opened having been restored to its pre-Soviet glory after a six-year overhaul .... and in 2012 lucky cruisers on the MS Volga Dream can look forward to a visit backstage and to opera or ballet performances at the Bolshoi and Mariinsky theaters.

Volga Dream cruiseline has planned an amazing journey through the heart of Russia from May 29 to June 10 from Moscow to St.Petersburg.

The cruise will provide a combination of music, history and art together with an insight into modern Russia and a close-look at the momentous changes taking place there.

Among the trip highlights will be private opera performances on board MS Volga Dream by soloists of the Moscow Helicon Opera and lectures about the greatest Russian writers by a professor of Slavic Languages of Yale University.

Visits to the Tolstoy house and Dostoevsky memorial apartment are included and specially arranged early entrances to the Hermitage and state Armory.

There will be guided tours of the Diamond Fund, Tretyakov Gallery and the State Russian Museum and visits to the Kremlin, Red Square, Novodevichie cemetery, Peterhof, Catherine’s Palace and Yusupov Palace.

Posted by Prow's Edge Cruise Magazine at 6:36 PM No comments:

The 10 Tropical Escapes aboard the all-inclusive Regent Seven Seas’ all-suite Seven Seas Navigator are available from January through April 2012. Two-for-one fares start at $4,999 per guest and include free round-trip air and bonus savings of up to $2,000 per suite on select sailings if you book by December 30.

As part of the deal, guests will enjoy a free one-night luxury hotel package before sailing and choose from as many as 51 complimentary shore excursions. Depending on the port of call, guests can learn to scuba dive on the world-renown reefs of Cozumel or discover the secret Mayan underworld by trekking and rappelling through a maze of caves in Belize.

Posted by Prow's Edge Cruise Magazine at 11:50 AM 1 comment:

Still the World’s Most Beautiful Voyage 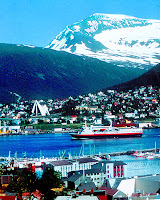 Previously named the "world's most beautiful voyage" by Lonely Planet's "Bluelist," the route garnered even more attention earlier this year as the subject of the Guinness World Record for "Longest Live TV Documentary," a 134-hour broadcast that attracted nearly six million viewers from 148 countries.

Highlights of the voyage include the beautiful Art Nouveau town of Ålesund; Molde, with its magnificent view of the Romsdal Alps; the charming streets of Trondheim, Norway's first capital; crossing the Arctic Circle; the picturesque Lofoten Islands; and Hammerfest, the world's most northerly town. Fares for the March 15 to May 31, 2012 departures range from $2,354 to $10,841 per person, double; higher pricing is for suites. Members of the 1893 Ambassador Club, a loyalty club for those who have previously sailed on Hurtigruten, receive 10% off as well as a range of onboard benefits.

Embarking from Bergen, the voyage sails through Hjeltefjord to the UNESCO listed Geirangerfjord, which affords unbeatable panoramic views of the Seven Sisters waterfall.

In Trondheim, guests can view the city from the Gamle Bybrua ("Old Town Bridge") and visit Norway's largest Gothic religious structure, the centuries-old Nidaros Cathedral, before traveling past the Kjeungskjær lighthouse and crossing the Arctic Circle.

The Lofoten Islands, located within the Arctic Circle, are rich with history of both land and sea: its shores are the site of the Lofotr Viking Museum and it is located near the world's largest deep water coral reef.

Other ports include Kirkenes, home to the famous Kirkenes Snowhotel and Gabba Reindeer Park; Hammerfest, a center of Sami culture; Honningsvåg, the gateway to the North Cape; and Kristiansund, where some scientists believe the first Norwegians originated from.

The voyage ends its journey in Ålesund, the most important fishing harbor in Norway and home to the Norwegian Centre of Art Nouveau Architecture, before returning to Bergen.

Posted by Prow's Edge Cruise Magazine at 1:20 PM No comments: