Just in time for summer vacation planning, Paul Gauguin Cruises launches a new online experience, taking you on a journey through the exotic paradise of Tahiti. MeetMeInTahiti.com is a unique interactive site that asks you how you would spend five minutes exploring Tahiti.

MeetMeinTahiti.com allows you to “get away” to Tahiti with your Facebook friends. Check in to Tahiti on Facebook places and select three lucky friends to come along with you on a “Choose Your Own Adventure” through Tahiti’s best activities.

Enjoy videos of just some of the exciting excursions Tahiti has to offer, from swimming with stingrays in the morning, heading on a jeep safari in the afternoon and sipping cocktails with your favorite friends after the sun goes down. You can even take home (via email, Twitter or Facebook) postcards of you and your friends to share.

Paul Gauguin was inspired by them, Rogers & Hammerstein immortalized them in song, and James Mitchener wrote, “Anyone who has ever been there wants to go back.” I hope you’ll take five minutes to Meet Me in Tahiti, where luxury and chic adventures abound.

For an overview of Paul Gauguin Cruises, take a look at the PROW'S EDGE CRUISE MAGAZINE CRUISE LINE PROFILE FOR PAUL GAUGUIN CRUISES
Posted by Prow's Edge Cruise Magazine at 12:32 PM No comments: 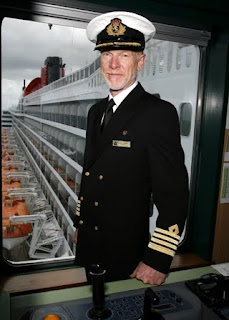 Captain Christopher Rynd has been appointed Commodore of the Cunard Line fleet – Queen Mary 2, Queen Elizabeth and Queen Victoria – the youngest fleet in the industry and The Most Famous Ocean Liners in the World. Captain Rynd assumes the title held by Commodore Bernard Warner who retired from the company on 19 April 2011.

Captain Rynd joined Cunard in 2005 when he took command of Queen Elizabeth 2. While on QE2, he came to appreciate Cunard’s distinctive product and traditions. Since then, he has commanded both Queen Mary 2 and Queen Victoria. He took Queen Mary 2 on her Maiden World Voyage and attended the Queen Victoria during her construction and sea trials and later proudly served as her master.

“I am delighted with the appointment of Captain Rynd as Commodore of Cunard Line and am sure that many of our regular guests will be as pleased as I and will join me in congratulating him on this notable achievement,” Shanks said.

Captain Rynd was born in New Zealand and grew up in Singapore, Sri Lanka, and in the islands of Fiji and Samoa of the tropical South Pacific. He began his sea career in 1970 at the age of 17 in New Zealand. The influence of his father and upbringing helped in this choice.

After completing his cadetship, Captain Rynd joined his first passenger liner, P&O’s Oronsay. His early sea days were in P&O vessels on routes between Australia and the UK, which also included cruising. Since then, most of his career has been in passenger cruise ships on worldwide itineraries. Additionally, he expanded his experience with eight years as a reserve officer in the British Royal Navy. He gained his qualification as Master in London in 1979. During his time with P&O and Princess Cruises, he commanded Royal Princess, Regal Princess, the first and second Pacific Princess, Pacific Sky and Sapphire Princess.

In 2008, Captain Rynd was elected a Fellow of the Nautical Institute, the international professional body for maritime professionals, and he took time out in 2009 / 2010 to work as a coach under the auspices of the Company’s training facility, ‘CSmart,’ in the Netherlands. This was an opportunity to travel in ships across the corporate fleets and be involved in the introduction of new procedures that enhance the safe operations in navigating ships.

Captain Rynd and his Australian wife Julie have three children who are now young adults, which allows Julie to accompany her husband at sea most of the time. When not at sea, they spend time in both Britain and Australia but visit New Zealand each year to hike and fish trout.

For more information about Queen Mary 2, Queen Elizabeth and Queen Victoria, and to book a voyage, consult your travel professional, call toll-free 1-800-7-CUNARD (1-800-728-6273) or go to www.cunard.com.

Click here for or an overview of Cunard Line
Posted by Prow's Edge Cruise Magazine at 7:23 PM No comments:

Holland America Line announced today that it has selected Maria Henderson’s essay as winner of the contest held to commemorate the line’s 40th anniversary of its transition from offering scheduled trans-Atlantic crossings to becoming entirely dedicated to pleasure cruising. A panel of judges chose the winning essay from more than 400 entries.

For her literary winning story, Henderson will receive a cruise for two on ms Rotterdam’s July 12, 2011, celebratory trans-Atlantic voyage from New York to Rotterdam, the Netherlands.

The “Your Trans-Atlantic Story” contest focused on classic Holland America Line crossing experiences during the line’s nearly 140-year history, whether told firsthand or through a family member or friend.

Henderson’s essay told the story of her family’s crossing from Rotterdam to New York City in 1956 aboard ss Groote Beer, a Holland America Line ship at the time. She, her four sisters and her parents made the journey to America to fulfill her father’s desire to become a U.S. citizen after being liberated from Buchenwald concentration camp in 1945. Throughout the years Henderson and her family continued to take Holland America Line cruises, including one in December 2010 where she met two American men who served in Gen. George S. Patton’s army that liberated her father in 1945. Making the tale even more incredible was that she also met a fellow guest who, she discovered after a chance encounter in the dining room, was on the same trans-Atlantic crossing aboard ss Groote Beer in 1956.

Upon hearing that her essay had won, Henderson said the news was yet another emotional twist of fate in her relationship with Holland America Line.

"It was on April 13, exactly 55 years ago, that my family and I sailed past the Statue of Liberty and into our American life,” she recalled. “I am excited to cruise back, hopefully with my siblings, to greet our cousins in Holland that as children waved good-bye to us from the banks of Rotterdam's River Maas those many years ago. I feel I have come full circle, this is a dream come true!" added Henderson. 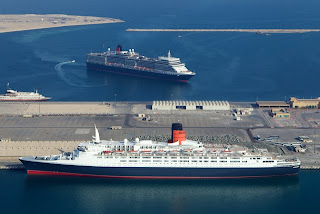 Upon her arrival in Dubai for an overnight visit, Queen Elizabeth exchanged whistle salutes with QE2, which left the Cunard fleet in 2008 after more than 40 years in service, to take up permanent residence in Dubai.

The new Queen Elizabeth is on the final leg of her first circumnavigation around the globe – the Middle East & Mediterranean Memories segment with remaining ports of call to Aqaba, Jordan; Suez and Port Said, Egypt; Athens; Rome; and Lisbon before returning to her homeport of Southampton on 19 April.

Oceania Cruises’ new flagship, Marina, arrived in Manhattan for the first time on Saturday, April 2, 2011. New York City is the last port of call in the U.S. before Marina crosses the Atlantic for a summer season cruising the Mediterranean and Baltic seas. 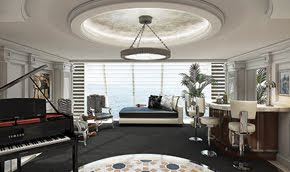 The new ship is not just the first cruise ship tailored for epicureans with 10 dining venues, but also the first to embrace a residential aesthetic in its design. Partners in the new design include:

To learn more about Marina, contact a travel professional, visit OceaniaCruises.com or call toll-free at 800-531-5658.