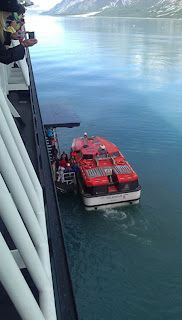 Yesterday, on the 19th August, Holland America Line’s ms Volendam rescued 70 persons from a disabled sightseeing boat, the 79-foot sightseeing vessel Baranof Wind, which had struck a rock near Russell Island in Glacier Bay disabling its steering and propulsion and causing the boat to take on water.

The ms Volendam rescued the 69 tourists and one Glacier Bay park ranger and cleared them all through security, gave them a safety briefing and then provided a meal.

“It’s the code of the sea to provide assistance in an emergency, and Captain Peter Bos and his crew responded quickly and professionally to render aid to the passengers of Baranof Wind,” said Stein Kruse, president and CEO of Holland America Line.

The ms Volendam rendezvoused with an Allen Marine boat at around 6 pm to transfer the rescued passengers back to Bartlett Cove, where their excursion had originated.

The ms Volendam then proceeded on to its next port call at Ketchikan, where it arrived on schedule today.

The USA Coast Guard thanked the crew of the ms Volendam for their quick response to the emergency.
Posted by Prow's Edge Cruise Magazine at 6:21 PM